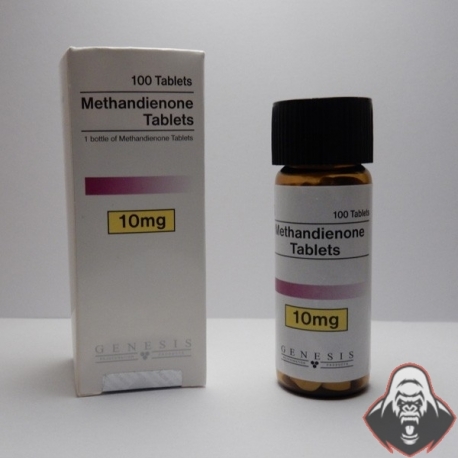 Methandienone Tablets - is a drug that belongs to anabolic steroids, has a potent androgenic and anabolic effect in the human body. The use of such tools contributes to protein synthesis and muscle recovery after heavy loads.

The drug allows athletes in the short term to achieve a significant increase in muscle mass and an increase in energy. The tablets, together with a set of mass quickly cause water retention, but is usually within a moderate, not leading to serious consequences.

Comments Methandienone Tablets Genesis says that the drug does not produce the desired focus on relief result, but effective courses in the accumulation of muscle mass. Along pills increase appetite, which only helps to increase body weight.

The duration of the substance - about 3-4 hours. Therefore methandienone can not be called a long-acting drug. During the course of daily administration required to maintain an optimum concentration of the active ingredient. But does not cause problems because of the pills easier to take than any injection.

The first drug analogs Methandienone Tablets by Genesis (Poland) became available in the late 50's - early 60-s of the last century. methandienone - - active substance was developed by John Ziegler, along with the American company "Ciba-Geigy". The free sale of anabolic appeared a few years after its creation and quickly became popular as a drug.

Over time, the demand that fell in medicine, with the advent of more advanced non-steroidal counterparts, but is becoming increasingly popular in the sport as doping agents. Current drugs are methane - a popular steroid on the market, used by thousands of athletes.

The tablets are taken before a meal. The daily dose is usually divided into a morning and an evening reception. The drug should be used in an amount of 20-50 mg per day. In the first experiment, you can start with small doses, gradually increasing the amount of material received - until optimal response.

The dosage of Methandienone Tablets for beginners should not exceed 30 to 40 mg per day. 3-4 tablets a day - is an effective dose for athletes who do not have much experience with the treatment of sports pharmacology.
Full course Methandienone Tablets may last 6-8 weeks. With prolonged use, it is fraught with side effects and ineffective, since the displacement activity to steroid side effects. Overall, taking into compliance with the recommendations contribute to an increase of up to 10 kg (and possibly more) of muscle mass. The result also depends on the power of the athlete and the training mode.

The steroid is combined with other anabolics, so you should do a competent combination of receipt of the biggest improvements. It is not recommended unless considered ligament with drugs that increase side effects. These include mainly hepatotoxic combination with anabolic and androgenic steroids and methane itself is toxic to the liver.

Metendienon tablets, even one of almost guarantee good results, but to ensure gain muscle mass is better to combine, for example, injectable stanozolol or methenolone enanthate.

Alone or in combination completion of post-cycle therapy is necessary to avoid the consequences and consolidate certain improvements. Here usually take clomiphene or tamoxifen (anti-estrogens that improve testosterone), but rarely clenbuterol and other drugs also used.

The effective action of oral steroid showed the sport long. Judging by the comments, for most athletes is the anabolic methane, provides not only progress but also good health. Working in his spare time, and not by force, always pleasant.

Methandienone Tablets also much criticism buyers indicate that for women a similar drug is not the best option. Their use can contribute to phenomena of virilization. But, however, weightlifting and bodybuilding athletes at their own risk are rarely taken and achieve considerable success. Here only applied in such cases is reduced doses compared to men - usually 2 to 5 mg per day, and sometimes up to 10 mg per day if necessary.

We must not forget that abuse and/or predisposition Methandienone tablets can cause side effects. Steroids, as noted, is toxic to the liver is able to lead to increased blood pressure, fluid retention, and gynecomastia in men. In addition, risks are associated with decreased testosterone production, so you should look for during and after the course, and other androgenic side effects - acne, oily skin, excessive sweating, aggression, baldness androgenozavisimoe growth.