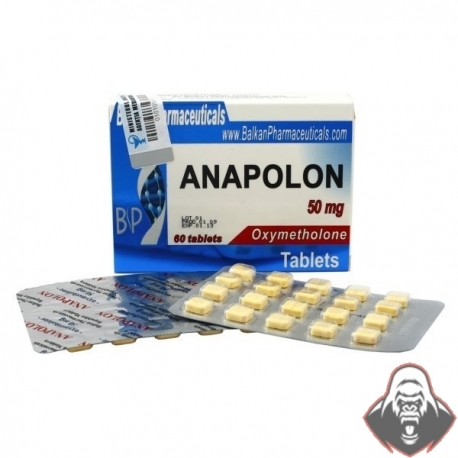 Oxymetholone (also known by other trademarks, such as Anadrol and Anadrol) - an anabolic steroid, which was developed in 1960 in Mexico. This drug was first released for the execution of the same year, the company Syntex (trademark) "Anadrol-50." Initially, the drug was to be used in the treatment of anemia (anemia) and osteoporosis. In addition, the tool was designed to help patients malnourished and weakened people (to boost their muscle growth).

Over time, however, many other non-steroidal drugs have been developed that are able to treat anemia and osteoporosis at least effectively, and it is for this reason that Anadrol's popularity has fallen almost to zero, and in 1993 SYNTEX management of the company, like other manufacturers, has decided to end release (production) of the drug.

However, Anapolon still existed in medicine because there are a lot of new studies in which it was found that this agent is effective in treating HIV infected patients.

Anadrol tablets produced. The weight of each tablet - 50 mg. This drug - is one of the most accessible of steroids. However, it should be noted the important point is that this tool is also capable of causing significant side effects (in the long run, the latter is typical of any anabolic steroid, and that is already there to surprise just anyone).

androgenic activity was 45 percent testosterone;
Anabolic effects are 320 percent testosterone;
Conversion to estrogen (aromatase) is absent, but the drug has an estrogenic effect;
Toxicity to liver (hepatotoxicity) increases;
The duration of action of the drug is 15 hours;
The drug is used orally (tablets);
Time during which it is possible to detect the drug, is not more than 8 weeks.

Increased muscle mass (and very significant increase, Anapolon considered to be one of the most efficient bodybuilding AC, because both the preparation of 1 single course easily possible add up to 15 kg, but occurs after a significant withdrawal and approximately 30 percent will merge).
A significant increase in strength (since 2 weeks of the course, you can feel silushku heroic).
The elimination of pain in the joints, to improve their functions (which has two reasons, first - because of the retention of water in the body, the second because of the large production of synovial fluid in the body).
The drug reduces sex hormone binding globulin, which in turn, produces the effect of certain much more vivid anabolic hormones.

Anadrol is highly toxic to the liver. To put it more accurately, clinical studies were performed, lasting 30 weeks. During the study guinea pig given, the dosage of which was 50 mg per day, and the result revealed frequent side effects in the liver.
The drug is not infrequently contributing to the accumulation of fluid in the body as well - gynecomastia, high blood pressure, severe acne, hair loss, prostate problems, increased blood cholesterol levels, irritability, anxiety, etc. . and for this reason, it is necessary to include anti-estrogens (Nolvadex and Clomid) in the course. In this case, the whole point is that scientists believe that Anadrol is able to bind and activate estrogen receptors (so no one can be insured). During the course, be sure to use estrogen receptor blockers like Clomid and Nolvadex.
It is extremely rare, but there are still cases (for example, when athletes use high doses) that this steroid can cause mild nausea, headaches, loss of appetite, stomach pain, apatiiyu, drowsiness. In general, it is, in principle, not so scary, but all this affects the general health of the athlete.
Anapolon to a much lower degree than other anabolic steroids will suppress the natural production of testosterone.

The Anapolon course lasts from 4 to 6 weeks.

Continue to use this medication for more than 6 weeks, not recommended for 2 reasons:

The greatest effect of increasing weight can be observed during the first 3 weeks of the course;
The high probability of liver toxicity (risk of health problems increases).

The optimal dosage for beginners is 50 mg per day, which limits the dosage of the drug is not more than 100 mg per day. More than a hundred that do not need to be raised (because it has long been shown that increasing the dose does not lead to better results, but the risk of side effects increases). At the end of the course will be held by the PCT (P