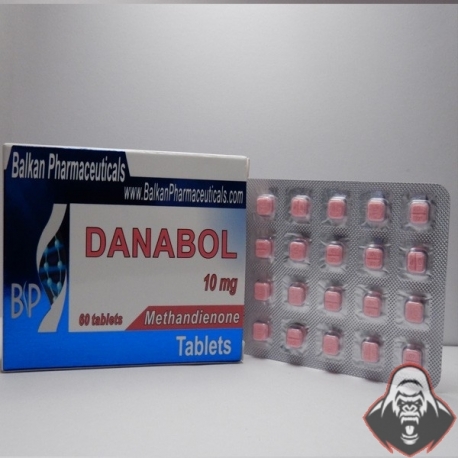 Danabol by BalkanPharmaceuticals is a classic 'goal', used actively for over half a century in power sports. As an active ingredient in this tool makes methandrostenolone - it is an anabolic androgenic and anabolic origin, which until today can be found in the free market in some countries (this applies, and Moldova).

As a general rule, methandienone takes by mouth. However, there are several companies that produce the injectable form, while the demand for it is virtually absent.

Buy steroids in UEE for increased muscle mass. So far, the good old "methane" occupies an important place among athletes who want to gain up to 15 percent of body weight in the short term (within a single year).
Acceleration of protein synthesis. It should be noted that the Danabol tablet push the body to increased production of a protein, which in turn allows a rapid recovery of damaged muscle fibers during training.
Increased appetite. During the use of Danabol BalkanPharmaceuticals athletes train much more intensely and, as a consequence, a greater amount of nutrients is required in order to replenish the body's reserves.
increase the performance of serious power.
Strengthening joints, ligaments and the skeletal system.
Anti-catabolic effect. It is worth mentioning that methandienone does not allow muscles to "acidify" muscles quickly restored during breaks between exercises.

Methandienone (methandrostenolone) - is testosterone, which is modified to decrease androgen (2-fold) and increasing (also 2-fold) anabolic properties. It is also the active ingredient that binds to the androgen receptor cell.

How to use Danabol. recommended cycle Danabol

Danabol photo side effects At first, it should be noted that of course Danabol should be selected individually for each person. The optimal dose for man is receiving steroid 5 to 50 mg per day for 7 to 8 weeks. In that case, if the first course, it is recommended to start with small doses as well as the length of the reception. However, regardless of the daily dose, it should be very "break".

Eating Danabol tablets should be every 3-5 hours (depending on their half-life) - it will give you the opportunity to keep hormonal at the same level during the day.

Methandienone itself is toxic to the liver and should be consumed after meals. If you want to gain lean muscle mass (it is not a secret that methandienone retains water in the body, so to speak, "flood" you) should be included in the course is also stanozolol. In addition, the very effective combination with the testosterone Sustanon severe or another potent anabolic nandrolone.

Although most of the users are male, not infrequently there are disputes and questions as to how to use Danabol women and if it is possible at all to use them? Yes, women can actually take Danabol, but the dose should not be more than 5 mg per day.

Today, there is a lot of damaging information about the intake of methandienone. Some authors also exaggerate their possible side effects, in turn, on the contrary, reducing their anabolic effects.

Danabol course should be "diluted" by any estrogen: for example, clomid or tamoxifen. Most of the side effects (high blood pressure, testicular atrophy, hair loss, acne, masculinization in women and gynecomastia in men) can be found in athletes, who greatly exceed both dose and duration of the course.

It should be noted that Danabol 10 reviews of Balkan Pharmacists among athletes are quite contradictory. A large number of complaints received by beginners who are not satisfied with the phenomenon of reversion and the fact that they are heavily "flooded" with water. However, without exception, ordinary athletes and athletes are met from the effect obtained during the course dianabol by which the result is possible to get up to 10 kg (and sometimes more) muscle mass.
The bad reviews about Danabol among professional bodybuilders come together almost unreal. Classical Dianabol action fully complies with all results stated by the manufacturer.

The bad reviews about Danabol among professional bodybuilders come together almost unreal. Classical Dianabol action fully complies with all results stated by the manufacturer.

Experienced athletes are given a slight increase in weight, but a competent combination with other AAs avoids the phenomenon of reversion and, in turn, all writing goes nowhere. To date, methandrostenolone is one of the best ester