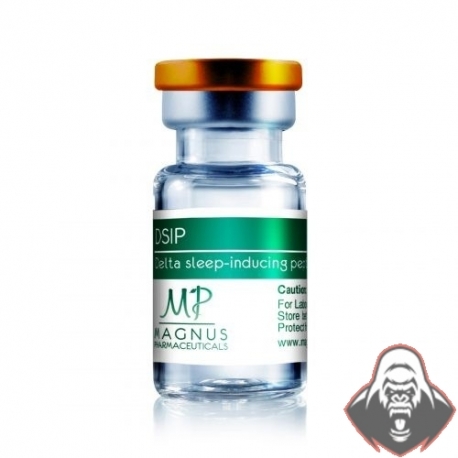 Delta sleep-inducing peptide, abbreviated DSIP, is a neuropeptide that when infused into the mesodiencephalic ventricle of recipient rabbits induces spindle and delta EEG activity and reduced motor activities.

Its aminoacid sequence is Тrр-Аlа-Gly-Gly-Asp-Ala-Ser-Gly-Glu. However, it is the only neuropeptide in history whose gene is unknown,  raising serious questions regarding the actual existence of this peptide in nature.

DSIP is an amphiphilic peptide of molecular weight 850 daltons with the amino acid motif:
N-Trp-Ala-Gly-Gly-Asp-Ala-Ser-Gly-Glu-C

It has been found in both free and bound forms in the hypothalamus, limbic system and pituitary as well as various peripheral organs, tissues and body fluids. In the pituitary it co-localises with many peptide and non-peptide mediators such as corticotropin-like intermediate peptide (CLIP), adrenocorticotrophic hormone (ACTH), melanocyte-stimulating hormone (MSH), thyroid-stimulating hormone (TSH) and melanin concentrating hormone (MCH). It is abundant in the gut secretory cells and in the pancreas where it co-localises with glucagon.

In the brain its action may be mediated by NMDA receptors. In another study Delta sleep-inducing peptide stimulated Acetyltransferase activity through α1 receptors in rats. It is unknown where DSIP is synthesized.

In vitro it has been found to have a low molecular stability with a half life of only 15 minutes due to the action of a specific aminopeptidase-like enzyme. It has been suggested that in the body it complexes with carrier proteins to prevent degradation, or exists as a component of a large precursor molecule, but as yet no structure or gene has been found for this precursor.

Evidence supports the current belief that it is regulated by glucocorticoids.

Gimble et al. suggest that DSIP interacts with components of the MAPK cascade and is homologous to glucocorticoid-induced leucine zipper (GILZ). GILZ can be induced by Dexamethasone. It prevents Raf-1 activation, which inhibits phosphorylation and activation of ERK.

Many roles for DSIP have been suggested following research carried out using peptide analogues with a greater molecular stability and through measuring DSIP-like immunological (DSIP-LI) response by injecting DSIP antiserum and antibodies.