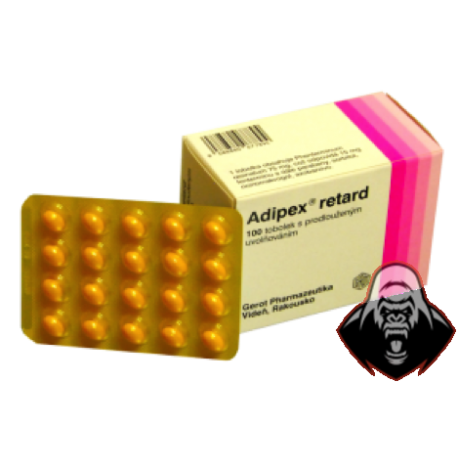 Adipex Retard is a totally powerful medication in treatment of obesity in people having a high body mass index.

The preparation is based on a formulation that has been included in the FDA-approved drugs registry back in 50’s of the past century. Phentermine, the active substance, represents a time-tested solution boasting comprehensive fat burning, fat production prevention and appetite control features (in Australia it belongs to the category of appetite suppressive pills).

However, despite the drastic changes you can count on tangible support – apart from its primary fat elimination properties, the medication has a positive effect on your psychological health, allowing you to deal with the changes easily, with almost zero risks of emotional breakdowns.

Even though Adipex Retard is a rare guest in the US market, the preparation is largely available at a variety of online drugstores. Adipex Retard is an old good phentermine hydrochloride, but in a slightly different form and shape. The drug is designed by an Austrian company Gerot Pharmazeutika.

The drug comes in a more handy to use soft capsule form – 30 or 100 units per pack and typically offered at a price slightly lower than branded US analogs. Importantly, the long-term treatment is not only unnecessary, but even contraindicated – the average treatment period fits in 4 – 6 weeks.

Thus, you won’t have to spend huge amounts of money even in the long run.

According to the statistics, since the commercial release of phentermine in 1954 over 60 million of prescriptions have been issued in the US.

The interest in the drug is fueled by the impressive results it provides – a conjunction of regular exercising, low carb diet and healthy lifestyle enables you to lose 3 – 5% of weight with the first treatment course.

Thousands of patients make a choice in favor of Adipex Retard for a number of strong reasons:

This is how it launches the process of transformation:

When a person is hungry, the body emits neuro signals that flow to the brain center, so it gets excited and the feeling of hunger emerges.

Adipex Retard is designed to target and block these signals due to the effect of phentermine – promotion of norepinephrine in particular. The preparation impacts hypothalamus and the feeling of hunger passes away – not with a single intake, but throughout the entire course of treatment, so you can effectively control your hunger and change your daily ration without gigantic psychological efforts.

However, you don’t have to starve – the body needs food to maintain normal activity of all the biological systems.

As soon as you shift to an updated diet plan and add regular physical exercising to your lifestyle, phentermine will start working effectively in terms of fat burning.

This process is associated with the release of noradrenaline and adrenaline, effectively excreting fat deposits from your body. Finally, the drug will give you the necessary performance boost, as the process of adapting to considerable changes could be stressful and nerve-wracking.

Whether it is a training in the gym or a temptation to drop in at your favorite candy store – Adipex Retard would be there to support you.

The drug is not indicated in cases where a patient’s body mass index is lower than 30kg/m2 (with the exception of the serious diagnoses, such as arrhythmia, hypertension, diabetes, etc.).

Adipex Retard is typically taken at a dosage of 37.5mg daily (one capsule); however, you should consult your doctor to have the optimal dosage selected properly.

Take Adipex Retard with plenty of water, preferably in the morning (the drug’s absorption is not influenced by meals, so you can take the pills regardless of foods).

Please, keep in mind that self-treatment can cause adverse reactions – ask your doctor whether the drug suits you.

What people say about Adipex Retard: