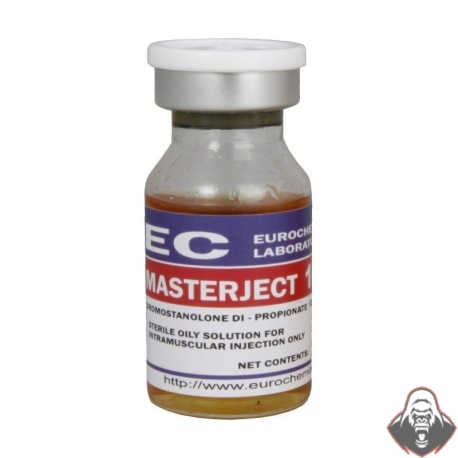 Masteron is an injectable steroid that is the active ingredient Drostanolone propionate.

Drostanolone Propionate is perhaps one of the more exotic androgenic / anabolic steroids, which can be used by an athlete. Was originally developed and used as an anti-estrogen used to treat breast cancer. It was especially in combination with a SERM (Selective Estrogen Receptor Modulators) used tamoxifen (Nolvadex) for the treatment of breast cancer, and did give a significant decrease in estrogen levels in women subjected to such treatment. There is not much used these days for such purposes, for different reasons, but for many athletes including competitive bodybuilders in particular remains a rather Drostanolone Propionate secret favorite of AS drugs.

Although Drostanolone propionate contains such anti-estrogenic properties, but also (with a DHT derivative) has anabolic and androgenic properties. Although in theory and on paper you can see, not to be a very potent androgen, in fact Drostanolone Propionate give higher androgenic effect than might be expected. The use of Drostanolone propionate, since it is an AAS will shut down natural testosterone production and thus, despite anti-estrogenic effect again, you have to think not that Drostanolone Propionate could be used as an option in post-cycle therapy, as recovery inhibit.

How does it work?

Despite these effects of this steroid, it is a rather weak AS in itself. One would hardly benefit from the use of all Drostanolone Propionate on his own, and can also take advantage of Drostanolone propionate alone in the loss of libido due to the shutdown of the lead body's natural production of testosterone. For these reasons, it is always recommended to stack with other steroids Drostanolone Propionate.

It is considered by many that the use Drostanolone propionate is a waste, if the user has a body fat percentage is higher than 10-12% has said. I can understand the argument, and the user must understand that seeing is not with higher body fat percentage in detail on the muscle as described, but I do not see it as a waste because of its anti-estrogenic properties. Such fibers can be no other accessories to cycle that will have other undesirable side effects would be, and besides, Masteron, in a synergistic manner with other work as drugs their effects reinforce to (for example, described with testosterone, as above). Masteron would be not recommended for beginners because it is not starting at this level is required.

An excellent example of a cutting cycle for an advanced user would be: (6-10 weeks)

150mg testosterone propionate every other day