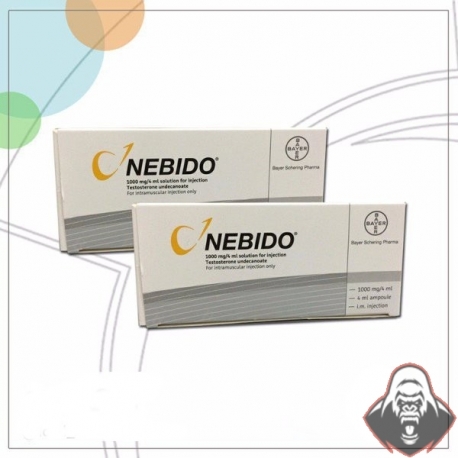 Provided on this page of our online steroid store, manufactured by Bayer Pharmaceuticals drugs Nebido, the main active substance is testosterone undecanoate - gradually acting steroid is oil based, which is famous for its androgenic and anabolic effects on the body , and this is very important for many athletes. That's why buying Nebido is often recommended personal trainers for your students, who need to build muscle. In this case, the drug went on sale relatively recently - in 2004, and since then its popularity is increasing every year, because the effectiveness of its actions really deserves.

It is worth noting that the original purchase Nebido advised those people who have had problems with the development of natural testosterone, but later the drug was widely used by athletes in training in the gym.

An important point in the use of this drug is that the drug injection Nebido do immediately after opening the blister, the drug administered in the muscle should be gradually and smoothly, being careful not to fall into a blood vessel.

For bodybuilders effective dosage is considered to be 1,000 milligrams of the drug for a period of two to four weeks. Therefore, the weekly dose will be 250 to 500 milligrams of the drug. Although in fair it should be noted that it is better to use with other drugs to improve the effect. Depending on the physical performance of an athlete who plans to buy Nebido and take training, the dosage may vary, so of course correctly spelled better consult a personal trainer. Including the dose can be significantly reduced, and depending on the training goals, which is for athletes involved in sports are less dependent on strength and muscle mass to take the protrusion. Nebido must be something different.

Nebido is strictly forbidden to apply to women due to non-returnable virilization and people under 18 years, as no studies have been performed. It only means Nebido contraindicated for people with hypercalcemia, any tumors in the liver and increased sensitivity to the drug.

Effects that makes Nebido drug in the body

Testosterone undecanoate as the active ingredient of the drug Nebido acts so that the proportion of fat mass is transformed into muscle, causing it to rise. Another effect of the use of this drug is a significant increase in red blood cells. As a result - improving the oxygen transport to the cells, and therefore increasing the resistance. In addition to the whole drug using Nebido increases the level of hemoglobin. In the course of time, athletes consider an improvement in appetite, so they need to comply with diet. Libido increases during the year and continued after it. Improvement of calcium supply in bone tissue.

Side effects of the drug Nebido

Because the Nebido drug aromatized to estrogens, particularly when used in large doses may be unpleasant side effects, such as:

increased body fat;
fluid retention;
gynecomastia;
appearance of acne;
allergic reactions;
dizziness;
sickness.
In view of this, all those who decided to purchase Nebido after use are also advised to use post-cycle therapy in the form of clomiphene or analogues thereof.

In addition, the side effects of using this drug should include the fact that possible itching site of injection, swelling and bruising. When the hair falls predisposition. There may be irritability and aggression, insomnia. Another unpleasant aspect can be considered as high blood pressure. Diarrhea and shortness of breath may also occur.

Buy Nebido can in two clicks on this page

Anyone can buy Nebido directly on this page of our site in just two clicks. The delivery took place in any region of europe as soon as possible, with the help of private postal service companies, such as "new mail" and others like her.

Our skilled managers are always ready to advise those who wish to buy Nebido and support dosage and effective drug application, so if you have any questions - please!