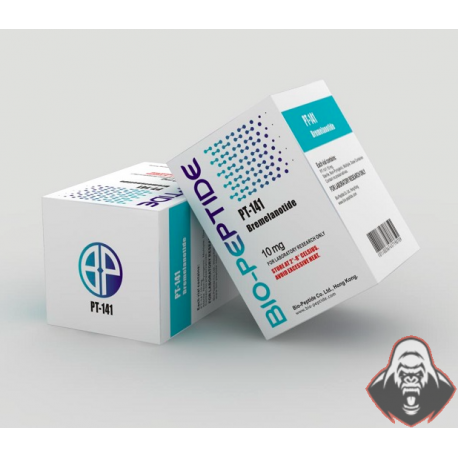 
Bremelanotide (cipher lab PT-141) is a single drug peptide. This peptide is similar to that of Melanotan 2. This peptide is used to enhance the desired libido and erection. To date, the peptide is still in clinical trials as the primary means for the treatment and recovery of sexual desire disorders and erectile dysfunction. PT-141 is the only one of its synthetic aphrodisiac type. Numerous studies 100% demonstrated by the fact that this medication is suitable for use by women and men. For women effective drug is in sexual arousal disorders. For men, bremelanotide restores potency or erectile dysfunction. The difference between RT -141 popular Viagra and other similar drugs, bremelanotide no effect on the cardiovascular system and acts tending to increase sexual desire directly through the hypothalamus.
Bremelanotide possible apply to people of both sexes. The main difference of this Viagra peptide and other similar effects of the media - is that it weakly affects the blood vessels of the genital organs, but also desired improvement of the sexual passion. Women who participated in numerous clinical trials, saying that they "were only trembling with desire and excitement." In most cases, the effect begins to appear after a couple of hours and peaks four hours after the injection.
After several investigations PT-141 adverse peptide no side effects have been found. One could even say more - the drug PT-141 significantly increases the immune system and protective properties of the body's test.
When PT-141 is given intramuscularly (in / m) or subcutaneously (s / C), you may experience barely noticeable discomfort, tingly feeling, slight redness, or a burning sensation at the site of injection. But such demonstrations, already after 5-10 minutes it will disappear without a trace.
The use of sports pharmacology by intramuscular (I / m) or subcutaneous (s / C) injection should not cause any much difficulty. But in any case, each injection must be carried out with strict observance of the safety regulations.
It is important to remember! Achieve the greatest effect with more medication in the wrong way. You will be able to achieve the desired result by adding the peptide drug rate Bremelanotide PT-141 (10 mg) other drugs, having sought the advice of athletes or our managers.
A considerable number of athletes and athletes, the host stroke of the PT-141 peptide, very pleased with the result. During our service with the delivery of this product, we have not seen negative comments about the Bremelanotide peptide. In addition, an important point is that the peptide Bremelanotide can be combined with other drugs.
Now the Internet is only flooded with pharmacology and anabolic sports stores. But, is it possible to order your product with a guarantee? It is not the fact.
But by ordering your product on our site you can remain absolutely calm. Your product, you will receive in the shortest possible time, insurance and sound.